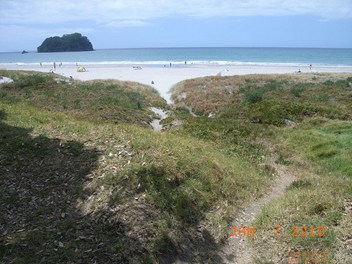 Add Your Photos
Show all events

Feb
7
Gourmet Night Market
Come and join us for a dining experience where you can choose from over 20 food trucks and cuisines. Bring a picnic blanket and sit and relax with the sounds of local musicians and enjoy the sunshine with friends and ... More ►
Feb
7
Landslide - Fleetwood Mac & Stevie Nicks Tribute Show
Landslide is an Auckland based, live 5 piece band, who have been celebrating the music of Fleetwood Mac and Stevie Nicks all over the North Island for the past 7 years. Covering well-known classics from Fleetwood Mac ... More ►
Powered by Event Finder

Mount Maunganui is undoubtedly one of New Zealands most popular beach locations during the summer period. The users numbers swell during summer with crowds reaching five thousands plus. Swimming is the most popular activity with surfing coming a close second when swell is present at the beach. Beach users are advised to swim in the patrolled area and to be careful of other beach users as collisions with swimmers, bogie boarders and surfers is a real and present danger. Mount Maunganui Beach has a Lifeguarding service during the summer months.

This beach is great for families large and small, with typically small waves and great facilities. It is patrolled by Surf Lifeguards during the summer months.

Swimming at the beach is very popular. The beach can get large and dangerous waves but the most common conditions are safe for swimming. If there are large waves the lifeguards will have the flags in the safest area and if it is very dangerous they will close the beach. Swimmers need to be careful of the shore dump that is strongest at the northern end. On higher tides the water becomes very deep very quickly, meaning swimmers could be out of a comfortable depth within a few metres from shore. The Mount Maunganui Lifeguard service is operational during the summer months and users should take note of their instructions. Swimmers need to be aware also that there is a strong rip that runs out along the southern headland (Moturiki Island).

Mount Maunganui main beach is a very popular surfing location when there is any sort of wave. There are a great deal of surfers in the area and they flock when the swell is big enough to surf. There is often a good lefthand wave off the northern end and a good righthand wave at the southern end. The beach can be surfed on all tides and is offshore in a south to southwest wind.

The main beach is not that suitable for fishing because there will generally be too much human traffic. The best area for land based fishermen is off Moturiki Island. Fishing from Moturiki Island is best on the changing light and fish that are commonly caught here include snapper, kahawai, gurnard, john dory and the occasional kingfish.

The beach is our favourite playground, but it can also be a dangerous place. Learn about the hazards at Mt Maunganui and be prepared so you and your family can enjoy the sun, sea and sand safely this summer.

Sorry, the webcam is currently unavailable.

We want you to have a great time whilst visiting Mt Maunganui. But take a moment to learn more about being safe on New Zealand Beaches. More ►

Patrol times vary – please check with the local club & always swim at a patrolled beach, between the flags.

Click a safety symbol for more information on the risk

4 simple rules to keep you safe

We want you to have a great time whilst visiting Mt Maunganui. But take a moment to learn more about being safe on New Zealand beaches and looking out for each other. More ►

DIAL 111 in the event of an emergency

Mount Maunganui Beach is located 5 kilometres north of Tauranga on the East Coast of the North Island. The main beach itself is approximately 700 metres in length and 50 metres wide. The beach is white sand and there are very large shell deposits. There are rocky headlands at the northwestern end of the beach where the Mount is located, this is also the location for the Mount Surf Life Saving Club. The Mount stands 230 metres in height and is a popular location for people to walk around and up. There is also a headland attraction at the southern end, that being Moturiki Island (better known as Leisure Island). The island is long, oblong and attached to the beach by an established sand bar. Many people walk out over the island to fish and swim. Mount Maunganui Beach is undoubtabley one of New Zealands most popular locations, on any given day during summer there will be hundreds if not thousands of people here. Behind the beach there is a small grassy reserve of 20 metres in width and there are picnic tables in this area along with rubbish bins and shade. Behind this further are the high rise apartments, residential housing, basic shopping and food stores and numerous other facilities.

No comments for this beach yet. Be the first!
More comments

Many councils provide the results of their weekly monitoring. This lets people know what the most recent bacteria levels were. Remember, even sites with low risk can be unsuitable to swim at from time to time and we recommend that you avoid swimming for 48 hours after heavy rainfall.