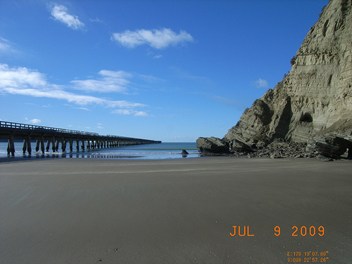 Add Your Photos
Show all events

Jun
30
Let Me Be Myself - The Story of Anne Frank
ANNE FRANK STICHTING (Foundation) The Holocaust Centre of New Zealand Imagine spending years in hiding because of prejudice and hate. This was reality for Anne Frank and the other residents of the secret annex in ... More ►
Jun
30
Secret Garden
Recommended for age 6+ ​ One of the most delightful and enduring classics of children's literature, The Secret Garden has remained a favourite with children the world over ever since it made its first appearance in ... More ►
Powered by Event Finder

Tolaga Bay has a small permanent population. Numbers increase greatly over summer and there are two camping grounds at the beach, one which is free, located directly behind the Surf Life Saving Club and a commercial camping ground which is located at the southern end of the beach. This means swimmers will be scattered over the whole length of the beach. Tolaga Bay has a Surf Life Saving Club that patrols weekends and public holidays during summer. Swimmers need to be aware of the hazards around the wharf and also the large Uawa Rivermouth.

This beach is well suited for families, make sure your family is prepared for the beach conditions, the beach is patrolled by Surf Lifeguards during the summer months.

Tolaga Bay is a popular swimming location. The bay is sheltered from swell and although it usually has some sort of a wave they are predominantly small and not very powerful. Tolaga Bay can get large dangerous swells but these are not common. Bathers do need to take care around the rivermouth which can have a strong rip and also around the wharf which can be dangerous. Tolaga Bay has two camping grounds, one is behind the Surf Life Saving Club and the other at the southern end of the beach near the wharf, so it is common for people to swim all along the beach.

Tolaga Bay is not a popular surfing destination as it usually has small waves. Surfers do travel here when the swell is too big to surf in other areas around the coast.

Fishing is popular at Tolaga Bay and the wharf at the southern end of the beach provides a very good location for line fishing as the wharf attracts fish and allows lines to reach reasonably deep water. Kingfish are also plentiful off the end of the wharf during their season.

The beach is our favourite playground, but it can also be a dangerous place. Learn about the hazards at Tolaga Bay and be prepared so you and your family can enjoy the sun, sea and sand safely this summer.

Sorry, the webcam is currently unavailable.

We want you to have a great time whilst visiting Tolaga Bay. But take a moment to learn more about being safe on New Zealand Beaches. More ►

Click a safety symbol for more information on the risk

4 simple rules to keep you safe

We want you to have a great time whilst visiting Tolaga Bay. But take a moment to learn more about being safe on New Zealand beaches and looking out for each other. More ►

DIAL 111 in the event of an emergency

Tolaga Bay is on State Highway 35 and is situated 56 kilometres north east of Gisborne. The township is on the north bank of the Uawa River near the rivermouth. Tolaga Bay’s most unique feature is the concrete wharf which was completed in 1929 and is New Zealand’s longest. The wharf is located at the southern end of the beach. There is also a camping ground at the south end of the beach. Crossing the bridge going north, leads to the northern end of the beach where Tolaga Bay Surf Life Saving Club is located. Three quarters of the top floor of Tolaga Bay Surf Club was destroyed in a recent storm. Directly behind the Surf Club is the Tolaga Bay Golf course and just north of this is a free camping ground.

No comments for this beach yet. Be the first!
More comments

Many councils provide the results of their weekly monitoring. This lets people know what the most recent bacteria levels were. Remember, even sites with low risk can be unsuitable to swim at from time to time and we recommend that you avoid swimming for 48 hours after heavy rainfall.